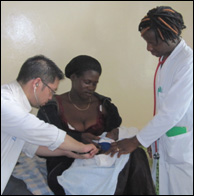 After arriving in the country, we immediately drove to the Banso Baptist Hospital. Located in the relatively small town of Kumbo, the latter part of the drive there consisted of unpaved roads and truck-trapping mud due to the rainy season. The town itself is a conglomeration of shops, food stands, and some restaurants along intersections of red dirt roads.

The hospital there provides care for men, women, and children. The pediatric ward consisted of a building with three sections--a general wing, a primarily post-surgical wing, and a more intensive care section. In a separate maternity ward, there was a small room for neonates requiring medical care. There is also a Burkitt's ward. The pediatric division could house upward of 35 patients.

Upon our arrival, the entire pediatric division was under the daily care of Vera, a Cameroonian nurse practitioner. She had been doing an admirable job in a setting where there had not been a trained pediatrician for many months. Simple x-rays were available, and certain ultrasounds could be performed. The selection of medications was certainly workable but limited, and drugs on formulary were not always available. Some lab work could be performed, but many labs felt routine in America, such as a reliable basic metabolic panel, were not available. Impressively, unlike some other rural international medical settings, blood and urine cultures could be requested.

We encountered a wide variety of pathologies, including malaria, typhoid fever, severe osteomyelitis, and heart failure. One striking case of neonatal tetanus  a baby who truly required American pediatric ICU level care  passed away given the limitations of the setting. Of course, there were many common pediatric medical problems as well, such as asthma.

In my time there, we initiated the use of the CPAP set up and training left by a previous physician. I also gave a lecture to the doctors and nurse practitioners there regarding neonatal sepsis and its diagnosis and management. That arose out of an identified need for education regarding this special population. Finally, I ran a training session in the safe use of 24 hour syringe pumps that had also been left by other visiting doctors but were never used because of lack of training.

It is my hope that in addition to the direct medical care we provided, that the teaching will continue to benefit patients in Cameroon.