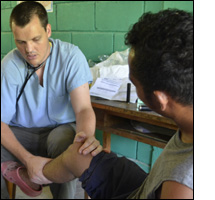 I arrived in San Pedro Sula Honduras at mid day on a Saturday in early June 2012. We were a group of about twenty, 4 residents, three attending physicians, and a pile of dedicated students in medicine and pharmacy who had just completed their first year of medical education. For 5 hours we travelled in rented diesel pick-up trucks whizzing within feet of pedestrians and donkeys on a narrow Honduran highway. We were hosted by the Catholic church in Olanchito, who greeted us with food and shelter. The Pastors there were a source of both housing, local know how, and community organization. That night the cries of the local roosters, donkeys, dogs, and Honduran humidity were also a welcome of sorts.

The following day we drove through three rivers and steep mountain dirt roads to arrive in La Hicaca, which is the central community in a series of 17 mountainous villages which are home to about 2,000 people with nearly no access to health care. For the next five days slept in a 3 room school house with a concrete floor. In the mornings we would pack our bags and set them to the side of the room and run clinics in the same space. For patient's privacy, we manufactured makeshift rooms out of sheets which hung from the rafters above.

The clinics were arranged in a model called the Adult Health Initiative (AHI). Basically, this model arranges patient visits around a series of stations where different health problems are addressed. The four stations were Dermatology/Musculoskeletal, Gastrointestinal (which included de-worming), a station for screen for hypertension and diabetes, and a wrap up station where data from the clinic was collected and any final concerns were address by our clinician most fluent in Spanish.

The clinics were a great source of service and learning. The highest impact interventions were felt to be education on hygiene, indoor air quality, and hydration, de-worming, treating fungal skin infections, and removing ear wax. We brought equipment for pap smears and partnered with a state public health nurse to have about a hundred women screen for cervical cancer.

We also had opportunity to participate in a clean water initiative which has been going on in the community for 3 years - and based on data collected by the state health department - has decreased the incidence of diarrheal illness in La Hicaca by two thirds. The clean water initiative involved distributing water filters purchased from a manufacturer in Tegucigalpa and instructing families in their use.

In addition to the clinical work we were welcomed by the community in several ways. They included us in their evening soccer matches, welcomed us into their homes, and even included us in a special baptism service at the local chapel. This was truly a life changing experience and I am grateful to the Benjamin H. Josephson Fund for helping to make it happen.