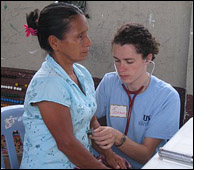 I never imagined a trip to Ecuador would include a house visit to a 97 year old woman in a Tsachilas community. We traveled to provide clinical services to this community which is located approximately 2 hours from Santo Domingo, in the foothills of the Andes' Western Cordillera, in the province of Pichincha. This community, which may number only 300, exists on the cusp of extinction due to loss of their land, an obviously very limited populus, and a very limited economic and political life line. We saw approximately 120 individuals during one day in clinic, addressing issues from viral upper respiratory tract infections, to probable TB and cancer. It was difficult to translate our clinical behavior (automatically ordering diagnostic tests and imaging, making frequent referrals) into the context of the available resources and cultural perceptions of health and disease. I was acutely aware of this as I trekked off on motorbike to the home of the 97 year old woman.

I really didn't know what I was getting into when I was asked to go and make a house visit to her. I was told only her age (a rough estimate), and that she complained most often of pain. I set off with a stethoscope, pen light and bag of ibuprofen, hoping to do no harm and potentially address some of her concerns in as much as I was able to. She lived in a wooden hut with a dirt floor, next to another home of family members. Her living space consisted of her mattress on the floor, and a table strewn with the tools and odds and ends. Chickens intermittently flew in the window and door. She was almost blind, and very hard of hearing - only speaking Tsafiqui. As one of her family members translated for me, we reviewed her concerns: loss of vision, loss of hearing, pain in one ear, pain in her back, her hands, her feet, difficulty swallowing, loss of appetite, and weight loss. As I began the physical examination I felt very self conscious of the fact that she was entrusting an absolute stranger, a white woman, who doesn't know her culture or her personal history at all with what may have been her first encounter with Western medicine. I addressed what I could with her and her family, with the promise to have other medications delivered the next day. I don't know whether I offered her any meaningful therapy, and I left feeling very humbled.

Our other clinical sites included a remote village 2 hours from Cayambe, and of course the Hombro a Hombro clinic in Santo Domingo. My day at Hombro a Hombro was interrupted by a request to visit a local center which addresses the health needs of malnourished children. The pediatrician on staff had a meeting and I was suddenly in his role, and saw babies and infants and their mothers, addressing chronic and acute issues.

I left exhausted, satisfied, and as usual, in a state of some confusion over what I represent as an individual, as a physician, and as a privileged Caucasian when I travel in a capacity such as this. In short, I felt very lucky to have been able to participate in this effort, and hope that I can continue to contribute to my local and international community.