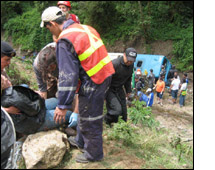 Being my second trip to Ecuador with this medical brigade, I thought I was prepared and had an understanding of how it all worked and what the patients would need. However, I quickly realized, my learning had only just begun.

As we drove the steep and winding roads through the Andes Mountains, traffic slowed to a stand still. We looked down in the ravine to our right and saw a bus below. It had almost collided with a gas tanker and rolled down the cliff. People were scattered throughout the hillside. Within no time at all, our entire team was assisting in the rescue of those injured. From stabilizing patients on backboards, to carry them up the steep hill, to giving water to the workers, our entire team played a part. Our journey in Ecuador had only just begun but our impact was already significant.

It was our first day in the Tsachila village which is an indigenous population with limited exposure to outside influences. I had already seen 15-20 patients when a 65 year old woman sat down with me and began listing her complaints. She was always tired and complained of a headache and a stomach ache. Her feet and her back hurt at the end of the day and her heart always hurt. After a lengthy history, it was clearly this hard working woman had reflux, arthritis and needed glasses as well as new shoes. However, diagnosing her heart pain was becoming troublesome, it didn't radiate, it wasn't crushing, it didn't occur during exertion and she denied associated symptoms such as sweating, palpitations or shortness of breath. Finally, I asked her to describe when it started. "It started five years ago when my husband died and I've been suffering every day since." Finally, I felt like I got it.

I realized that it is not our medicines, our medical knowledge or expertise that patients seek, it is our time. Taking the time to listen and care has the power to cross cultural lines and allow a glimpse into another person's life in a whole new way. As I took this lesson to heart for the remaining clinics, I found I learned more about my patients than their medical complaints. I learned what was important to them and how they handled adversity. I learned that no matter how much the heart ached, they survived.