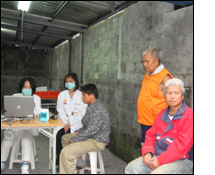 Between the Central Mountain Range of Taiwan and the Pacific Ocean, lies the beautiful Hualien County. Twenty-five percent of the population is of aboriginal descent, of which the majority live in the remote mountainous areas of the county. This indigent population has historically had difficulty accessing healthcare because of the challenges stemming from the location of their villages. Sixty years ago, Dr. James Dickson and his wife initiated mobile clinics in Hualien to educate these indigenous people about hygiene and to provide them with medical relief. Today, these mobile clinics are continued through the Mennonite Christian Hospital and serve several villages in the Wanrong and Jhuosi townships.

With a team of physicians, nurses, and translators, I travelled with these mobile clinics riding about two hours to reach our destinations - much of the way on single lane roads. We broadcasted our arrival in Mandarin, Taiwanese, and the tribal language specific to that village as we drove around the town. The clinic sites were often generously donated spaces including empty garages, churches, or rented government buildings. At some sites the only light available was the single lamp we brought in from the mobile clinic; yet other sites were comparable to clinics seen in the United States. However, at each site our basic tools remained the same. We had stethoscopes, blood pressure cuffs, glucometers, thermometers, and drawers filled with different medications. The patients ranged in age from young babies to the elderly. The most common afflictions included upper respiratory infections, hypertension, diabetes mellitus, alcoholism, betel nut abuse, liver cirrhosis, and gout. While it was interesting to diagnose and treat these disorders, I found it much more challenging to address and observe the psychosocial aspects of the patients' lives. One particular patient was an elderly woman, whose skin was dark, tough, and creased from her daily labor under the sun. Her husband had passed away and her children had moved out, leaving her alone. Despite being on multiple medications, her hypertension and diabetes mellitus were not well controlled. She reluctantly admitted that she often confused her medications and would take them erratically. Upon hearing this, another patient suggested that she visit the patient daily to help the elderly patient manage her medications. The patient's neighbor announced that together they would achieve her target blood pressure and blood sugar.

My trip to Hualien was extremely rewarding. I was truly touched by the sacrifice of the mobile clinic staff, as well as the neighbors and patients who showed unending support and optimism. I would like to thank the Benjamin H. Josephson fund for the chance to participate in this unique and enriching opportunity!