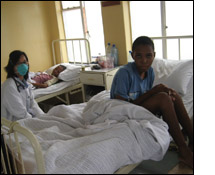 I was most frustrated by my limited ability to help. Outpatient medicine was almost completely different compared to back home - there were no appointments, no continuity, and little preventive care. Patients in the outpatient department (OPD) were seen on a first come, first served basis. I was slower than the local doctors because I was accustomed to obtaining detailed histories, performing exams, counseling patients, and documenting everything. Medical records were kept by the patient and notes were written in English. Based on the brief documentation, it seemed that doctors did not spend much time counseling patients or focusing on preventive care. How could they when there was a steady stream of patients waiting to be seen outside the door? In some ways, the limited resources was a refreshing change because I could really focus on evidence-based medicine advising patients on exercise, sleep hygiene, and building supportive relationships, in addition to prescribing the generic medicines that were most effective in controlling blood pressure and blood sugar.

Additionally, I had to tolerate an amount of uncertainty because I was diagnosing and treating disease based on limited information. Obtaining a detailed history could be challenging and it was so important in this setting because it was all I had with which to work. There were cultural constraints such as notions of duration or how most of the Basotho wore layers including wool blankets in the 85 degree summer heat and everyone endorsed having fever, chills, and night sweats. Before ordering labs, I had to consider what reagents the lab had in stock. Before prescribing medicines in OPD, I had to consult the list of what antibiotics were currently stocked in the pharmacy that week. The x-ray machine was down for three weeks. Another week, an anesthesia machine was not working so no surgeries could be performed. I had to focus on the history and treat everything empirically.

Despite these concerns, I had an amazing experience. Thank you to the Benjamin H. Josephson Fund for supporting my trip.